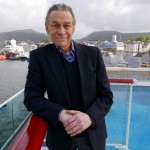 Berlitz River Cruising in Europe and the USA

The third edition of the book was published in June 2018 (the fourth edition is scheduled for publication later in 2020 (but may be delayed due to the damaging effects of the coronovirus pandemic). The 320-page book was greatly expanded to include the steamboats (and replica steamboats) plying the USA’s main rivers. A labour of love, it is intended to help you to decide which rivership and river cruise company to book, and provides comparative information unavailable anywhere else.

More river cruise companies dipped their toes into the water during July, including CroisiEurope.

The first river cruise in Europe was operated by Nicko Cruises, with a Rhine River cruise itinerary. Passenger numbers aboard the company’s NickoVision was capped at 70%. social distancing was observed, one–way signs clearly marked at pinch points, restaurant seating was assigned and meals were served in two seatings. This may become the “New Normal” – at least for some river cruise operators – for the time being.

A number of new riverships debuted in 2019, but perhaps the most newsworthy and interesting was AmaMagna of California-based Ama Waterways. This is a double-wide rivership, built exclusively for the Danube, has a lot of space per passenger (rather like the Crystal Mozart of Crystal River Cruises).

I am continuously testing the riverships – all belonging to different companies and operators. Since the introduction of the 280-page Berlitz River Cruising in Europe guidebook (2016-2017 edition), companies have been busy competing to provide better cruise experiences. This is good news, because my objective is always to keep standards high, and for the river cruise companies to improve their product and deliver the best cruise experience possible, given the limitation that the rivers, and nature, impose.

Interest in cruising on Portugal’s Douro river has increased. So has the number of companies and riverships being built and introduced. Operating from Oporto, the city famed for its port wine industry, cruises take you through some of Europe’s most beautiful scenery, as well as through five locks (the largest of which is Carrapatelo – with a 35-metre lift/drop – one of the largest in the world).

Now that Crystal Cruises is building four riverships with ‘smart’ facilities, and AMA Waterways and Scenic are adding additional elements to their vessels, we will see other companies, such as Tauck, making “upgrades” or “catch-ups” to their fleet. In fact, in 2016, Tauck reduced the number of cabins on its 110-metre Swiss Emerald, Swiss Sapphire, MS Esprit and MS Treasures. In 2017, Scenic reduced capacity aboard Scenic Diamond and Scenic Sapphire (both operating on French rivers) from 84 to 78. By reducing the number of cabins, the ambiance provides a more intimate less crowded feeling in what were previously cramped main lounges.

The Port of Amsterdam is working to improve the security of river cruise vessels and passengers at Western Europe’s leading turnaround point for river cruises.  As a result, the port has stepped up monitoring of its river cruise mooring locations and the busiest river cruise locations in the Amsterdam port area will get extra surveillance at night.

Construction began in August on Crystal River Cruises’ first newbuilds Crystal Bach and Crystal Mahler in Wismar. They will sail on the Rhine, Main and Danube, and each accommodates 11 passengers.

Belmond (the travel and hotel group) will add a pair of new luxury barges to its fleet in the French wine region of Burgundy in 2017.  Joining the five existing barges that comprise Belmond Afloat in France, Belmond Lilas and Belmond Pivoine will sail the canals of Champagne and Alsace in France.

Capacity reduction on the French rivers

Crystal Cruises has stated that its newbuild riverships Crystal Debussy and Crystal Ravel  will now be redesigned and redeployed to the Danube itineraries. Meanwhile, Scenic is redesigning its France-based Scenic Diamond and Scenic Sapphire in 2017, reducing passenger capacity from 167 to 155.

Elisabeth Gürtler served as the godmother for Crystal River Cruises’ first vessel, Crystal Mozart, during festivities in Vienna on July 11.  She is managing director of Vienna’s famous Hotel Sacher, and acting director of the city’s historic Spanish Riding School, home of the Lipizzaner stallions.  Crystal Mozart sails from and to Vienna, the vessel’s homeport.

In two days of festivities in Vilshofen, Germany, AmaWaterways’ AmaStella and AmaViola were named by Jackie Friedman and Carole Smethurst. Each carries 158 passengers